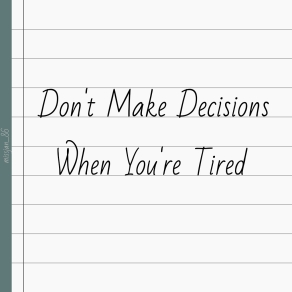 Hi guys!  Today’s Life Tip Friday has to do with making decisions.  One of things I found myself doing over the last several years was making decisions at the wrong time.  My mom actually pointed out that the majority of the time that I would make decisions, I was sleep deprived.  The decisions themselves weren’t necessarily bad, but for some of them, the timing was way off.  Ever heard timing is everything?  Well, it’s true.  For example, taking a shower in itself is great.  However, taking a shower while my toddler is awake and no one else is in the house…. not a good thing.  (By the way, that has never happened – just an example.)  Washing your hair is a great thing.  However, washing it the night before your next relaxer or texturizer…. not a good idea if you’re trying to avoid scalp burns.  Wearing a t-shirt and yoga pants can make a girl feel more comfortable.  However, wearing that in a corporate office at work is frowned upon; that is not the same thing as business casual.  See what I mean?  Well, what I failed to realize is that a lot of my ‘bad timing’ scenarios, or even just doing something I had no business doing happened when I was very tired or sleep deprived.  I didn’t realize a lack of sleep could affect your thinking, but it does.  Sleep deprivation is a pretty amazing thing.  It….affects….EVERYTHING – appetite, mood, health, and your ability to think clearly.  You literally do not think straight when you’re overtired, but that seemed to be the time that I would make most of my decisions.  My tip for you: Do Not Do That.  Learn from my mistake.  Don’t make decisions when you’re tired, because chances are you aren’t thinking clearly, and you’ll regret it later.  If it is not literally a matter of life and death, take time to rest before making your next move.  Taking time, period, is a good idea, even you’re not overtired.  Avoid making hasty decisions.  You don’t have to buy that purse right away.  You don’t need to go into contract on that property immediately.  There’s no need to rush things in a relationship all of a sudden.  Take your time.  Get your rest.  And don’t make that decision when you’re tired.